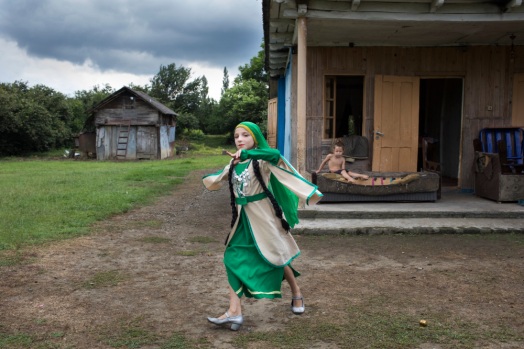 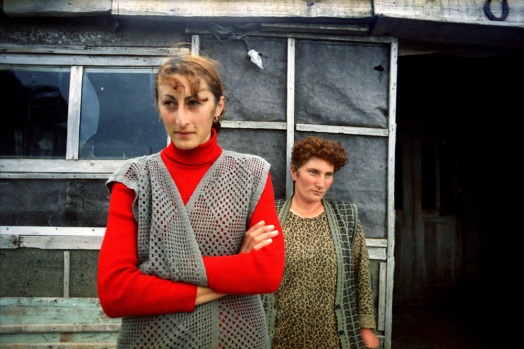 *This is my English version of my Georgian article published at Indigo magazine, Georgia in August, 2018

19 photographs of Daro Sulakauri currently exhibited at ERTI Gallery in Tbilisi through September 26 Tbilisi give us advantage to vicariously participate in solitary, sometimes heroic, always obscure lives of Georgian women. These images touch us even more because they are so blatantly matter-of-fact, although they all carry emotional charge, transcending visual boundaries. If there is a metaphor embedded in this or that image, it is only brought there by individual onlooker and not by the photographer. At the same time, images are all tentative and provisional in terms how they treat each particular theme, be it early marriage, passage of time, hard-working life of Chiatura. There is no finality or outward statement in the way photographer has treated her models. These figures of women in Sulakauri’s frame are frozen in time, and when you look away they will go on doing whatever they were doing, nothing has changed by your presence in their life. And this is precisely what makes Sulakauri and this show striking. Gallery ERTI continues with its tradition of introducing new voices and technologies into the Georgian art scene and thus globalizing it by providing larger context, by showcasing worldwide trends of art and how they are exemplified in Georgia. One mechanism for doing is by providing Western curators who bring their perception and aesthetical judgment.

Sulakauri’s show is curated by Uta Grosenick who has extensive experience. After organizing numerous exhibitions in 1990s Grosenick went onto editing books on photography and contemporary art in Taschen publishing house. “Art at the Turn of the Millennium,” “Women Artists” and “Art Now” all became quite successful and were sold worldwide. When asked why exactly she focused on women rather than on different subject matter Grosenick says:

–When I was looking with Daro Sulakauri at her photographical work, it was quite obvious that her strongest images were about women. It was not our set intention to show only women, it evolved through the selection. I do not consider myself a curator primarily interested in art by women, but I have always encouraged women artists in their work and will continue doing so. You may not forget that although more women than men are attending art academies the art world and especially the art market is still dominated by male artists.

Nina Mdivani (NM): What would you say is the most satisfying connection you have witnessed between a viewer and a work you have curated in general and in the case of this exhibition?

Uta Grosenick (UG):It is always satisfying to observe that an artwork initiates a process in a viewer, either of thoughts or of emotions. In this case, it was the artist herself, she had never seen her own work in such a big format than shown in the exhibition and you could recognize the surprise and the strong feelings on her face when she was standing in front of them.

NM:Until fairly recently photography was considered relatively accessible medium. Why do you think it needs curating?

UG: I do not distinguish between photography and art. Photography is art and it is beneficial for any art exhibition if the artist has the support of a curator.

NM:Based on what you have seen so far where would you place contemporary Georgian photography? Do you think it has a universal appeal or is more local in its approach, themes, subjects?

UG:Georgian art – photography is a part of this art – for sure has a universal appeal. We will be able to watch the development of this art and it’s spreading international recognition in the near future.

NM: What is your favorite image from this exhibition?

UG: I like all the images, but my favorite is probably the one on the light box in the window with four generations of Georgian women. The visual axis’ of the women who look in different directions and the one of the artist are breathtaking. She works with the light she got in the environment without a tripod etc. She reacts instinctively and very fast.

This image singled out by Grosenick encapsulates what moves viewers in Sulakauri’s images. They are honest, direct, simple, and, yet, far-reaching in their appeal. These visual narratives, as she definitely is a visual journalist in the best sense of the word, bring to mind Akutagawa Ryunosuke Japanese short stories. They do not have an ambition of encapsulating humanity, yet they still do so one distinct, lyrical, image at a time. Consequently, when looking at Sulakauri’s photograph I am constantly reminded of Roberth Barth’s idea that photography connects with us through mythic, “faint uneasiness which seizes me when I look at ‘myself’ on a piece of paper.”[1]Because it is fairly possible to see oneself in each of these women.

Sulakauri rises beyond being “social problem” photographer and yet, social issues are at the forefront of what she shoots.

Daro Sulakauri (DS): I am not a feminist photographer who solely questions roles and identities of women. I have consistently photographed stories of women because they live hard lives and go through enormous struggles. Sometimes I feel there is too much emphasis on femininity and actual stories get lost, so I thought that focusing on individual stories would have been more interesting in this particular exhibition.

One social issue that I care about deeply and have worked consistently over years is early marriage and a few images in this show are devoted to it. Today some families understand that this is an archaic and negative practice so they keep silent about it, which does not mean it happens less. No education exists for these girls, they are taken out of schools and due to this factor they will stay dependent, unlikely to find any decent employment. Early marriage is not as severe in Georgia or in the Middle East in terms of the age difference and some couples do indeed become happy over time. In Georgia, early marriage is more reflective of its tradition and socio-economic reality rather than cultural norm or expectation. Mother is married young so did her own mother so predictably this undereducated mother won’t look at her own daughter’s early marriage as something out of the ordinary pattern of life. Yet, these girls lose their childhoods as well as their educations. Girls in question are excited about their beautiful dresses and do not understand the irrevocability of the step.

DS: What is heart-breaking for me personally, is how this young girl will come into her new family and will become a housewife although she might have had a potential to do something different with her life. To me this is violation of women’s and human rights. In Georgia women were historically strong, we had King Tamar and in Tusheti region men are women are equal in their rights. I blame many things on Communism, including utilization of women as second class citizens.

DS: My favorite image in the show is one of Nana with whom I had a direct Skype call during the opening on June26. Idea for a direct call with object of my photograph first came during my work at Photoville festival in downtown New York, but respondent back than a grown up. Nana, 9 years old is one of the 8 siblings in the family. In this image, she is dressed in a traditional folk costume since she is aspiring folk dancer. Her mother is from Gali, Abkhazia. Nana lives in Khurcha Village. Before March 7,2017 Khurcha was a village of one of the main checkpoints between the de facto region of Abkhazia and Georgian controlled territory. Since than de facto Abkhazian government has closed down this checkpoint, leaving this village fairly diserted.

DS: I was not happy how this Skype call with Nana went and at one point I had to disconnect it because Nana was stressed by men asking silly questions. In the end, the girl was pleased but I was not sure it was a positive experience for her. It was a call from a different reality, too many things were new for her.

For exhibition at ERTI Gallery I chose images based on their visual significance and stories behind them plus I wanted to choose from all themes that I have previously worked on. One important project that is also represented here is Black Gold that explores lives of miners and cable car conductors in the town of Chiatura. Article was published in June,2017 in the National Geographic. Chiatura is situated around the largest manganese reserve in the Caucasus Mountains, as of 2016 there were 3000 workers in Chiatura’s 7 mines and 8 queries. Most people work for 700 GEL or 350 dollars per month in this remnant of the Communist past. The town is connected by the rusty cable car system built in 1954 is still mostly operated by women.DS: Chiatura is awash in manganese, it is all over the city, on every surface, on every wall, it takes time to get acclimated to this different air. Among numerous issues here: Terrible health rate, no safety mechanism for workers, poor ventilation, mines located directly above the mines so that when controlled explosions take place workers pretty much regularly explode their own quarters. Right now, Chiatura has become almost impossible to get to, as certain taboo surrounds this place. Georgian National Geographic did not publish my article until the US edition ran it.  And this is something that happens in Georgia not only with the theme of miners, quite often controversial issues are not discussed and after my publications some societal awareness is raised and I strongly believe it is a significant part of what I do.

DS: Awareness invites dialogue that can make further exchange of ideas/information possible and this in turn can and should facilitate change. Photography is a very strong and immediate format that perfectly suits George since it has so many themes and issues that need to be systematically advanced rather than cleaned under the rug of glamorous facades of touristic attractions. With my photos and individual stories a different degree of reality is introduced into the wider social discussion about regions. I have been raised through and by journeys since I was really small and also today I have been taught great many things by the people I meet on my photoshoots, I owe them. I deeply agree with Magnum photographer Gueorgui Pinkhassov take on Cartier-Bresson’s eponymous ‘decisive moment.’ According to Pinkhassov whatever you have done in your life, whatever childhood you had, whatever book you have read, wherever you have been, all this affects you and comes together in the millionths of the second when you press the button on your camera.

What Sulakauri does in her instinctive, yet, researched photographs she gives us a bridge to connect emotionally and intellectually with people who live hard, diverse lives and, yet, share with us same troubles and heartaches. This is what makes her body of work global and acclaimed and this, in turn, is what makes this show at ERTI Gallery fully in line with its vision of bringing the local Georgian art scene in accord with the Western art establishment by advancing authentic artists of this country.

View all posts by Nina Mdivani